What are the implications for snow and ice as Earth’s climate continues to change? To chip away at that question, two U Water Center researchers have based their work in some of the world’s most breathtaking mountains.

Rising steeply out of the borders of Pakistan, China and India, the Karakoram range plays host to several of Earth’s fourteen “eight-thousanders”–peaks that soar more than 8,000 meters (26,247 ft) above sea level–including the well-known K2. It’s a stunning landscape that draws alpinists from all over the globe, and, as it turns out, water researchers with varied interests.

As a visiting scholar in the U’s U.S.-Pakistan Center for Advanced Studies in Water, Imran Khan’s research is focused on Gamu Bhar, a glacial lake near his home in the Gilgit-Baltistan province of Pakistan. A graduate student at Mehran University of Engineering and Technology, Khan spent Spring studying in the shadows of the Wasatch through the Center’s Exchange Program. He worked closely with Dr. Summer Rupper, Associate Professor of Geography to learn more about using Geographic Information Systems and Remote Sensing technology–technology that will allow Khan to remotely observe variations in the surface area of Gamu Bhar and assess the risk of glacial lake outburst floods (GLOFs) in the high mountains of Pakistan. 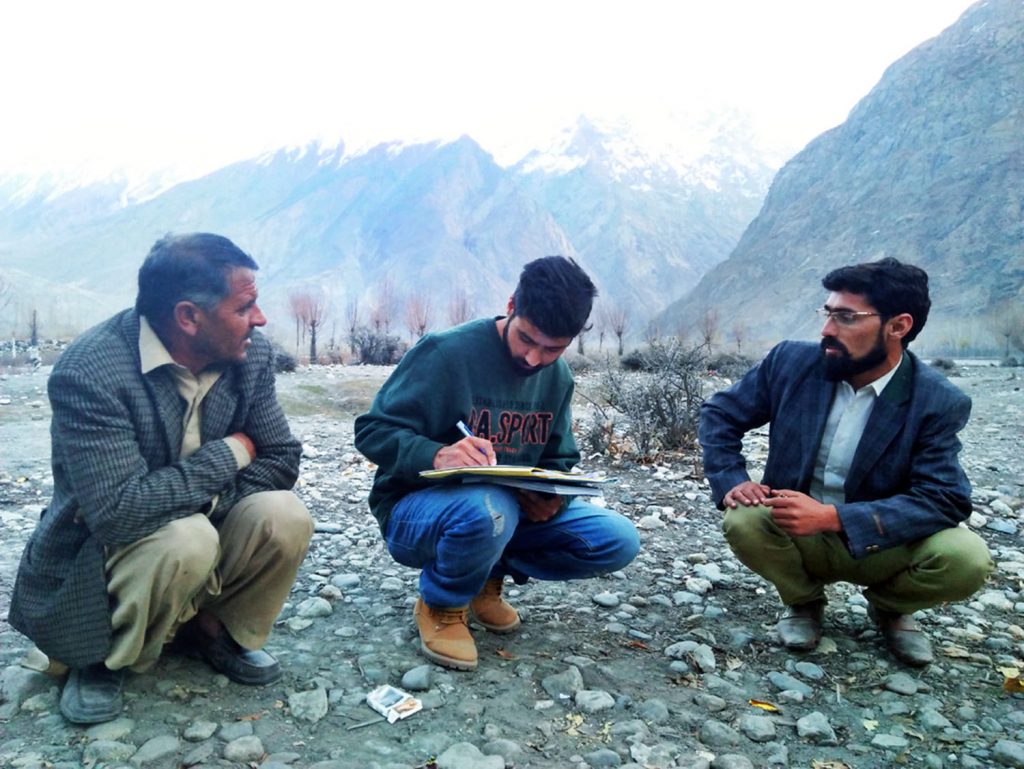 Unlike flash floods, GLOF events are difficult to predict; they are most similar to dam break floods since they are often initiated by the failure of ice, moraine or landslide dams holding glacial lakes. When glaciers melt and ice retreats, lakes form behind the remaining ice dams. These dams are relatively weak and unstable and when the lakes swell with increased melt, conditions are ripe for sudden outbursts, posing a threat to the villages down-valley. 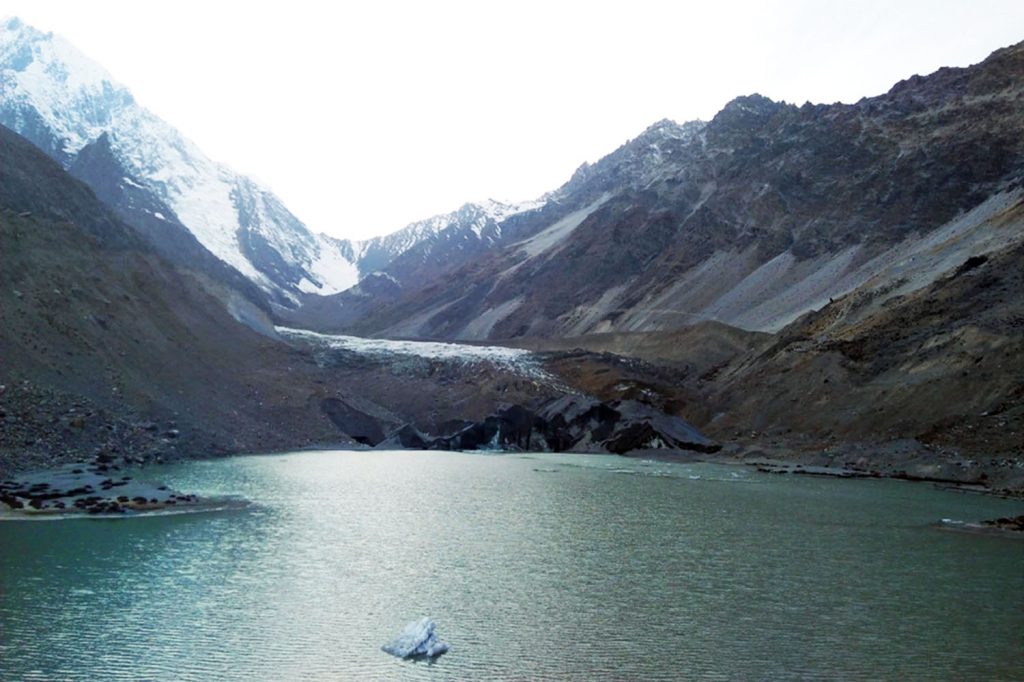 Gamu Bhar, a glacial lake near Khan’s home in the Gilgit-Baltistan province of Pakistan.

“District Ghizer has faced catastrophic damages, both environmental and socioeconomic, due to mammoth GLOFs in the past,” said Khan. “The most common damages include the destruction of roads and bridges, agricultural lands, and houses and sometimes loss of life.” Multiple events have been experienced in the area and there is evidence to suggest an increasing trend in the occurrence of GLOFs in the region. “Despite their regularity, their significance is not yet widely understood in Gilgit-Baltistan. Generally, people do not differentiate between flash floods and GLOFs,” said Khan. He hopes his research will not only contribute to a growing academic understanding of these events but will help educate communities at risk and influence policies and practices to reduce the impact of such floods.

“Climatologically [the Karakoram] is an interesting spot,” says Jewell Lund, a Ph.D. student at the U whose research also centers on the region. Lund is also interested in glaciers, but her focus is set on their surface energy and mass balances—both indicators of glacial status. “Looking at energy balance for snow and ice helps us understand when the snowpack is warming up and beginning to generate melt for the season. We want to pay attention because it helps anticipate runoff,” said Lund. 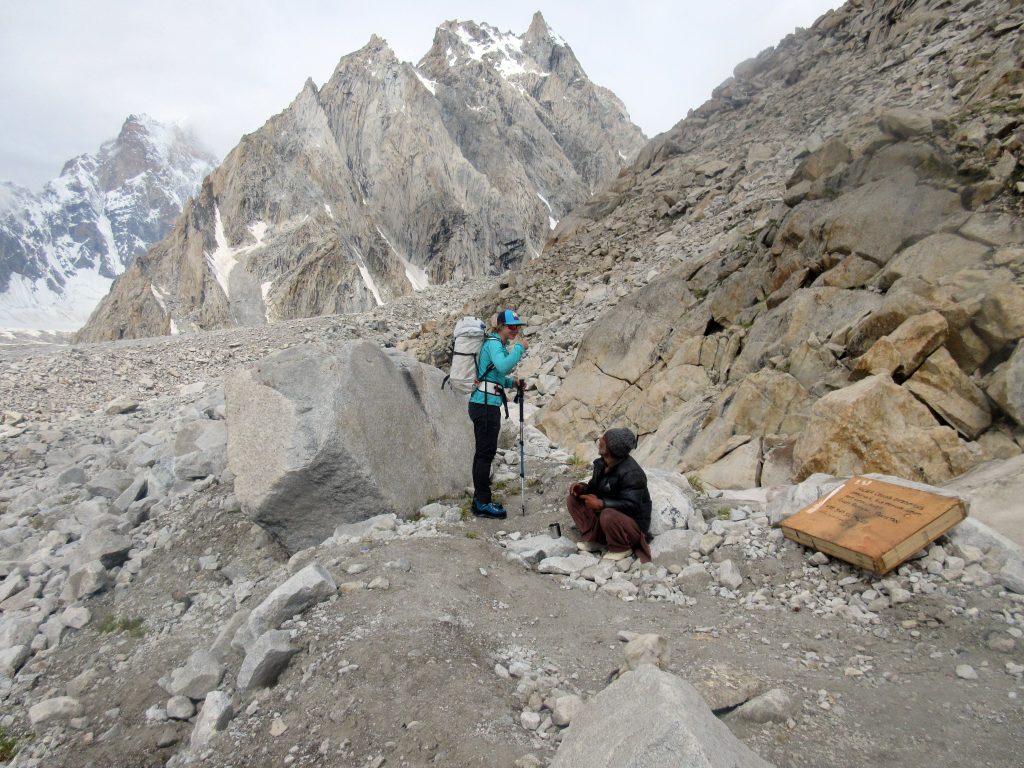 Jewell Lund chats with Qasim, sirdar for the trip, before heading out for fieldwork.

Not unlike the Wasatch Front, Pakistan is reliant on how much snow and ice is generated each winter–and how long it sticks around. The Indus dominates Pakistan’s hydrological system and 60-85% of its Upper Basin flow comes from snow and ice melt.

Unlike the Central or Eastern Himalayas, where the Southeast monsoon is the dominant source of precipitation, the Karakoram lies at the nexus of both the monsoon and the Mediterranean westerlies. The meeting of these two atmospheric systems sets the stage for dynamic weather patterns that can fluctuate wildly year-to-year, making it hard to predict how the systems will act in the future. “It’s very geographically complex,” said Lund, who is also an avid alpinist. The many hours Lund has logged on glaciers, both for work and play, has shown her just how dynamic glacial systems are. But her up-close view also gives insight into how much these systems are changing with climate. “These peaks are steeper than almost any other range. The topography, combined with the complex climatology, is such that different glacial systems are responding to climate change differently.” 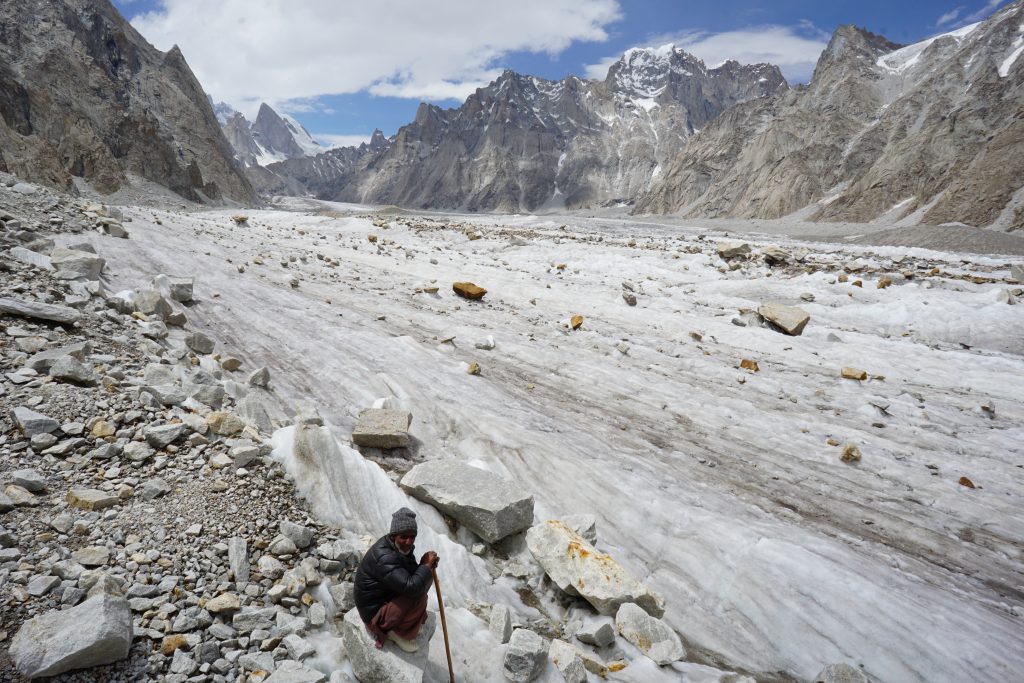 Glacial flow in the Karakoram.

Just as Khan hopes his work here at the U will enhance the ability of his home community in Pakistan to make research-based, proactive decisions as the climate shifts, Lund hopes that the impact of her efforts high in the Karakoram is also useful in Salt Lake City. “I feel really fortunate to do this work,” said Lund, who thanks mentors Dr. Rick Forster, Dr. Tariq Banuri, Dr. Steve Burian and her graduate committee for supporting what she calls a “great opportunity.”

“There are a lot of similarities between the Intermountain West and Pakistan,” said Lund. “We are both largely reliant on snowmelt for water. Both locales are really water-sensitive, vulnerable communities.” And, like many communities in the U.S., Pakistan must gauge how climate will impact snow and ice while supporting a growing population.

The inquiry for both researchers remains a challenging, albeit worthy, climb. “We can send people to the moon and replace hearts, but we still have a lot of natural resource questions. We still can’t truly answer ‘how much snow do we have?,'”marveled Lund.