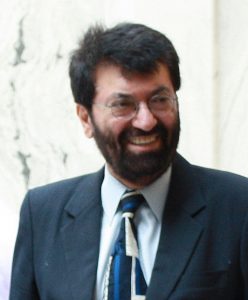 Banuri moves into the role from his positions as an economics professor and associate director of the  U.S.-Pakistan Centers for Advanced Studies in Water at the U. He also serves on the executive committee of the U Water Center.

The Higher Education Commission (HEC) is an independent, constitutionally established institution with a mandate to finance, oversee, regulate and accredit all institutions of higher learning in Pakistan. Banuri’s appointment has been hailed by the Pakistani education sector, including the Inter University Consortium for the Promotion of Social Sciences Arts and Humanitiesand the Federation of All Pakistan Universities Academic Staff Association. They specifically applauded the HEC for ensuring a merit-based appointment.

“I am honored as well as humbled by the trust reposed in me,” said Banuri, who said he will focus on improving the quality of education in Pakistan and vows a strong investment in students and faculty.

Banuri has requested a leave of absence from his current position at the U and said he is eager to explore partnership opportunities from his new post.

“The U is one of the universities on the priority list of the HEC for collaboration, including graduate student placement, technical assistance and capacity-building work,” said Banuri.“This will not change. In fact, it will deepen because of my personal commitment to these forms of collaboration.”

Banuri, whose passion for sustainable development has made him a sought-after expert all over the globe, brings a wealth of experience to the charge at the HEC. Banuri previously served as executive director of the Global Change Impact Studies Centre, a dedicated research institute for climate change studies in Pakistan. He was the founding executive director of the Sustainable Development Policy Institute in Pakistan and founding director of the Bangkok Centre of the Stockholm Environment Institute. Banuri also was a member of the Intergovernmental Panel on Climate Change, which received the Nobel Peace Prize in 2007. He holds a doctoral degree from Harvard in economics, completed his master’s degree in development economics from Williams College and earned his bachelor’s in civil engineering from the University of Peshawar.

At the U, Banuri has worked to establish the U.S.-Pakistan Centers for Advanced Studies in Water as a model for applied research on solving the world’s water crisis.

Founded in 2015 with the support of USAID, the U.S.-Pakistan Centers for Advanced Studies in Water is a nexus of higher education, government, business and communities working to foster water security in Pakistan. Alongside partner university Mehran University of Engineering and Technology, Banuri and other U researchers are forging solutions to water-related problems that inhibit education, health and stability. These water challenges — scarcity, inadequate sanitation and inefficient management — have a global significance and represent opportunities for sustainable solutions in other regions, including the American West.