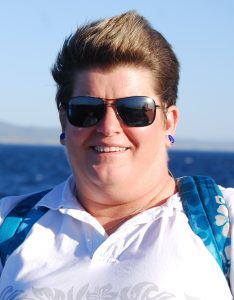 Whether we live on its salty coasts or far from its shores, we are all indelibly connected to the ocean’s waves.

In observation of World Oceans Day, held each year on June 8, the U Water Center reached out to Dr. Robin Kundis Craig to learn more about Utah’s many ties to the ocean, how climate change is impacting its systems and what we can do to mitigate our impact.

As a professor at the University of Utah’s S.J. Quinney College of Law, Craig researches the law and policy of “all things water,” including water rights, water pollution, and ocean and coastal issues, as well as climate change adaptation, the intersection of constitutional and environmental law, and the food-energy-water nexus. She serves on the Executive Board of the U Water Center and is affiliated faculty of the Global Change and Sustainability Center and the Wallace Stegner Center for Land, Resources, and the Environment. The University of Otago in New Zealand has appointed Craig as a Williams Evans Visiting Fellow during Fall 2018. Craig has authored, co-authored, or edited 11 books, 21 books chapters, and over 100 articles in both law and scientific journals.

Dr. Craig, can you tell us why oceans are so important?

Actually, it’s better to think of it as the “ocean,” singular, because the various parts of the ocean are connected, forming what’s really a single system–albeit, a very large and very complex system.

We can start with the fact that the plants in the ocean, especially the very small phytoplankton, supply over half–some scientists say as much as 85%–of the oxygen that we and every other animal on land breathes. Then we can talk about food: Well over half the human population of the planet gets at least 15% of its protein from fish, and fish provide a critical source of protein–at least 30% or more–to people in many countries around the world, from Japan and Indonesia to several coastal countries in Africa to most South Pacific island nations.

And then there’s weather and climate. In general, the ocean moderates the extremes of temperature and weather that we’d otherwise experience on land. For example, the Gulf Stream current keeps the United Kingdom and northwest European winters a lot milder than they’d otherwise be. Muck with the ocean’s systems of currents and heat re-distribution and things get weird very fast. For example, El Niño and La Niña events that start in the Pacific–more formally known as the El Niño-Southern Oscillation or ENSO–affect weather patterns all over the world and have been linked to cholera and malaria outbreaks. Scientists now think that the extent of sea ice melt in the Arctic Ocean during the summer affects winters in the northeastern United States and eastern Canada–the farther the sea ice retreats, the worse the winter.

What impact is climate change having on the ocean?

The ocean is a huge heat sink. According to the National Oceanic & Atmospheric Administration, the ocean has absorbed more than 90% of the heat generated from anthropogenic forcing (i.e., humans burning fossil fuels) over the last 50 years. That means that the climate change we’re already experiencing on land would be a LOT worse without the ocean.

But that heat absorption has consequences. Marine species are moving toward the poles to get to the cooler water. Those migrations, in turn, disrupt food webs and human fishing patterns. Local ocean currents are also changing. For example, upwellings–the currents that bring nutrients from the bottom of the ocean to the surface, usually fostering tremendous biodiversity (and great fishing)–have gotten much stronger in many parts of the world, resulting in new “dead zones” (hypoxic zones). Warmer ocean water can hold less dissolved oxygen, which is what fish and shellfish “breathe” through their gills. Warmer water prompts coral reef bleaching, like the major bleaching event that the Great Barrier Reef in Australia has been experiencing–and dying from. And on it goes… 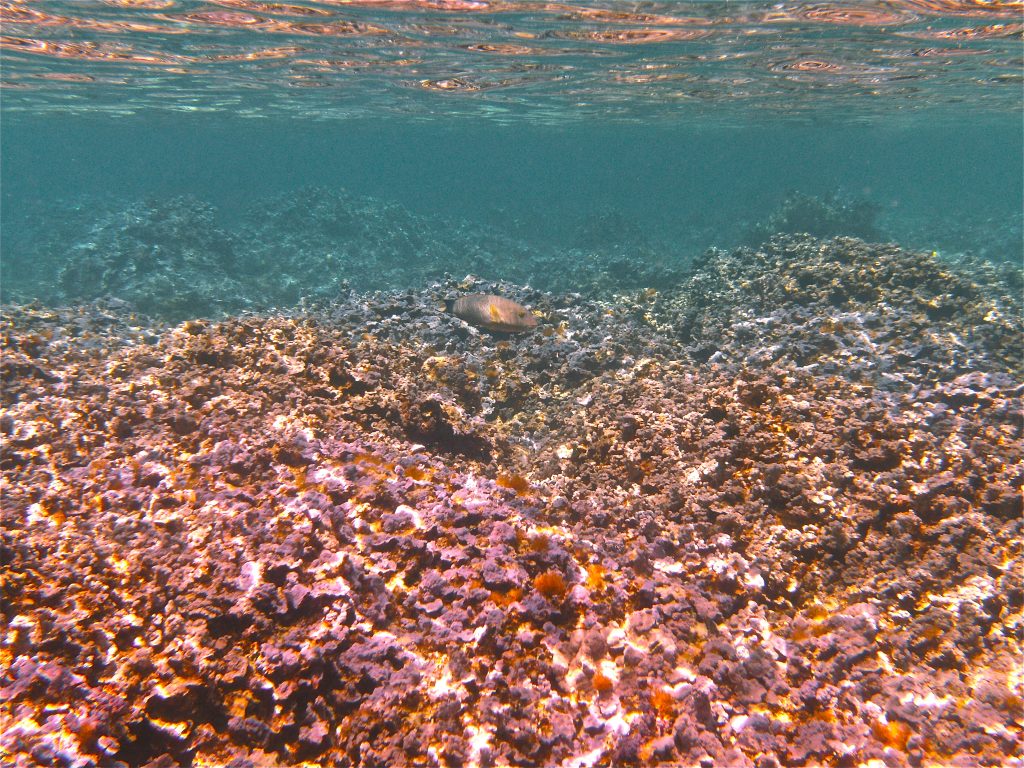 The other issue is ocean acidification, often referred to as climate change’s “evil twin.” The greenhouse gas most implicated in climate change is carbon dioxide. As it turns out, the ocean is the world’s largest carbon sink, and it has been absorbing roughly 26-40% of the human-created carbon dioxide since the Industrial Revolution–again, slowing the pace of climate change. However, that absorption comes at a price: the ocean’s pH is dropping. One of the most immediate impacts of this so-called “ocean acidification” is on marine organisms with shells, and ocean acidification is already interfering with shellfish aquaculture in Puget Sound and along the coast of Maine. The ocean has become 30% more acidic in the last 200 years, and that absorbed carbon dioxide becomes part of the geologic carbon cycle, meaning that it doesn’t cycle back out again for about 1000 years. The part that really keeps me up at night is the fact that ocean acidification played a critical role in the worst mass extinction event ever, the Permian–Triassic mass extinction event 252 million years ago that killed 90% of marine species and 70% of terrestrial species. (And before somebody protests: The asteroid-based extinction event that wiped out the dinosaurs was a different mass extinction event that occurred 65 million years ago.)

You write that we must push past “sustainability” thinking towards a more adaptive “resilience” model that allows us to cope with the inevitable changes of a shifting climate. How does adopting this mindset inform how we steward our oceans?

Mostly, we become way more precautionary in our interactions with the ocean. We stop thinking in terms of how much we can take (the current paradigm for fisheries management, for example) and start operating in terms of how little we can disturb the ocean. I’m on record as advocating that commercial ocean fishing should be phased out in favor of the environmentally benign forms of marine aquaculture. We also need to get serious about preventing plastic pollution, a lot of which ends up in the ocean. 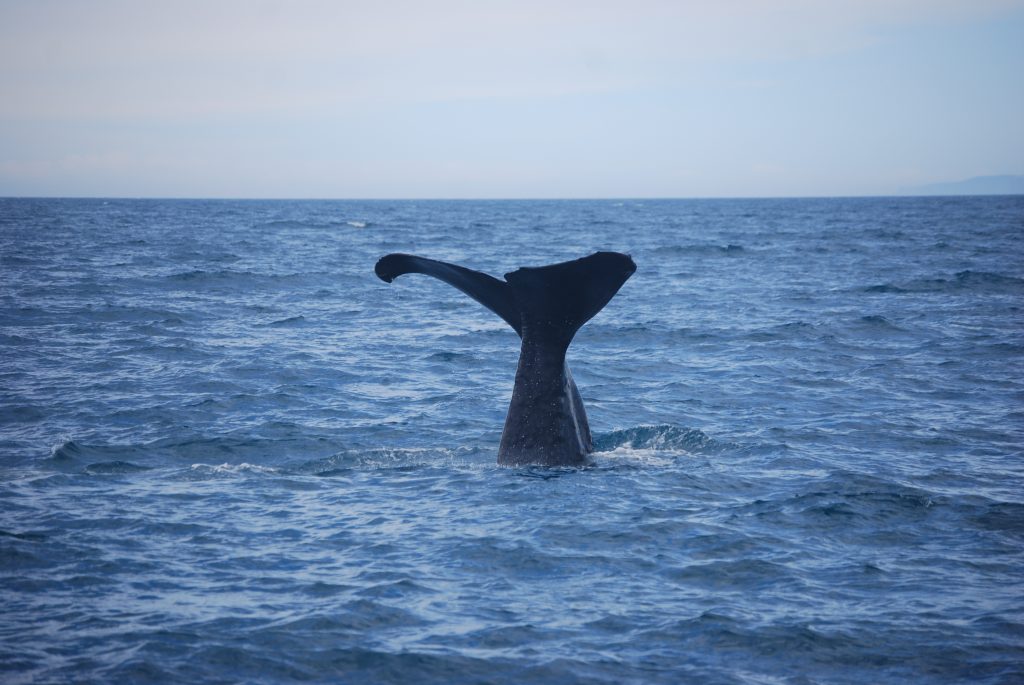 Can you tell me more about the intersection of law and oceans?

That takes 13 weeks in Ocean and Coastal Law, and even then we barely scratch the surface!

In a nutshell, most law about the ocean first grew out of, and then reacted to, two basic principles: (1) freedom of the seas, which remains the dominant paradigm for the high seas, i.e., the ocean more than 200 nautical miles from a nation’s coast; and (2) humans are too puny, and the ocean is too big, for human actions to affect the ocean’s well-being. The international community now knows that this second principle is just wrong, and so international law (the United Nations Convention on the Law of the Sea (UNCLOS III), the United Nations Convention on Biological Diversity, multiple treaties related to pollution at sea and from ships, and multiple regional fisheries agreements) and national laws have been trying to respond.

Under UNCLOS III, nations control 200 nautical miles of Exclusive Economic Zone (the water column and seabed, most important for national control overfishing and marine protected areas) and at least 200 nautical miles of continental shelf (most important for national control over mineral development). The United States is not a party to UNCLOS III but we treat these jurisdictional provisions as customary international law. Under the federal Submerged Lands Act, the first three miles of ocean are primarily the coastal states’ to regulate (for historical reasons, Florida and Texas control three marine leagues in the Gulf of Mexico); the federal government controls the rest. 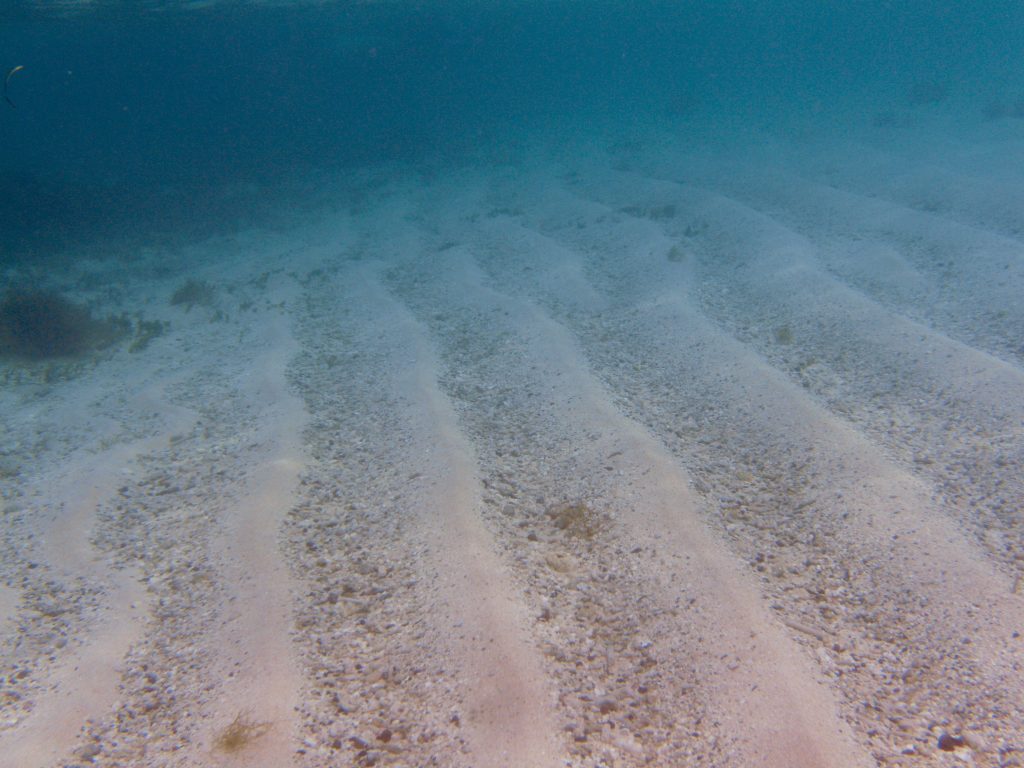 What is happening at the University of Utah with regards to ocean research?

Actually, there are a lot of people who work who do ocean-related work here. For example, one of the things that surprised me when I moved here is that Utah has the sixth-largest Pacific Islander population in the United States. The U is working to build the largest Pacific Islander Studies Initiative in this country. From a completely different perspective, Utah is known for its wonderful fossils, so a lot of paleography and paleo-marine biology occurs here. The U has an amazing medical school and health sciences complex and, in late 2017, researchers there received a $10 million grant from the Department of Defense to search the ocean for opioid alternatives. All of the climate researchers at the U–and we have many–have to pay attention to the ocean, from Dr. Ken Golden, an applied mathematician, who looks at seafloor ecosystems and global climate to Dr. Kathleen Ritterbush who looks at seafloor ecosystems and global climate.

Can you tell me more about the seed grant you and Dr. Jeff McCarthy recently received?

I’ve spent a good deal of my legal career with ocean and coastal law. Last Fall, I was fortunate enough to participate in a Rockefeller Foundation Bellagio Center Residency fellowship, where I worked on a new project about re-valuing the ocean from a legal perspective. As I got into that project, however, it became increasingly clear that it also warranted a broader interdisciplinary treatment. Soon after I returned, the U’s Global Change and Sustainability Center announced its seed grant programs for new interdisciplinary projects. I talked to Jeff McCarthy, Director of the Environmental Humanities program. Fortuitously, he was just getting interested in diving into the “Blue Humanities,” an emerging discipline that looks at human interactions with the ocean in art, literature, and environmental history from a variety of disciplinary perspectives. Together, we received a seed grant to put on an interdisciplinary conference on “Re-Valuing the Ocean” on February 14-15, 2019, which will be followed by a book of the same name.

We just secured Dr. Jeremy B.C. Jackson, emeritus of the Scripps Institute, to be our Thursday keynote speaker. Originally a coral reef ecologist, Dr. Jackson has done a lot of work on historical marine ecology to document how drastically marine ecosystems have changed over time, largely because of fishing. He gave a TED talk on the subject, “How We Wrecked the Ocean,” in 2010.

Congratulations on the grant. We look forward to the conference.
Why does the ocean matter to Utah and what do you want landlocked Utahns to know about the ocean?

1. You can breathe because our ocean is still healthy enough to produce oxygen.
2. Everything is connected, especially in terms of weather and climate. If it’s a great snow year–or a horrible snow year–the ocean had something to do with it. 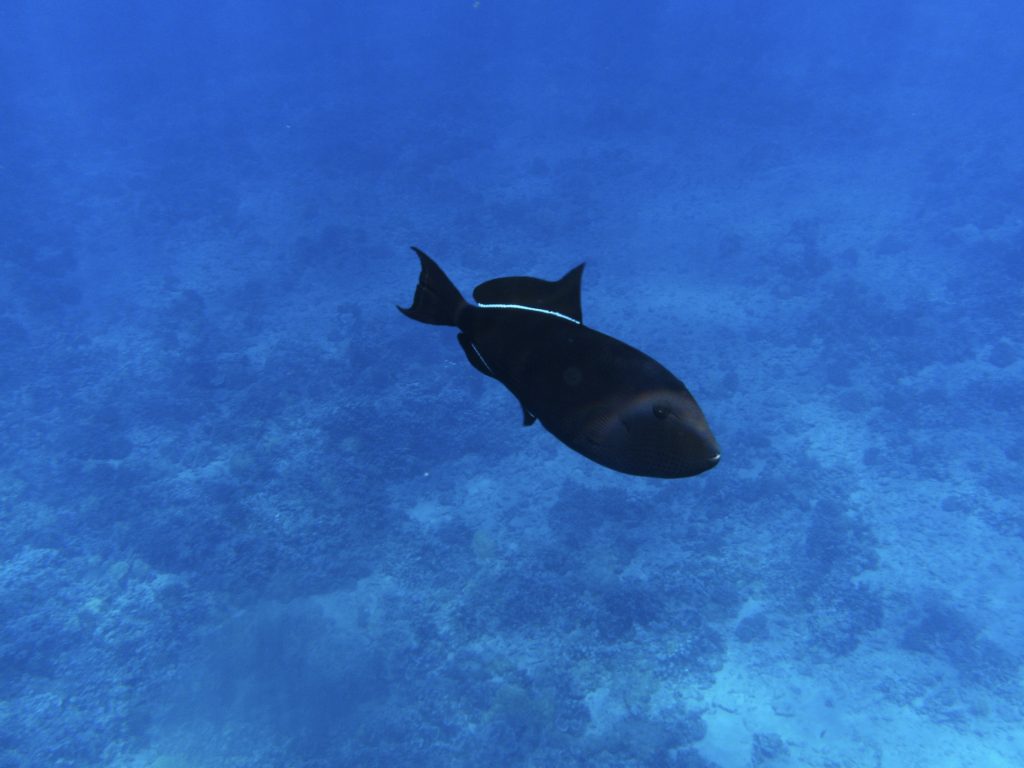 What are some everyday actions we can take to care for our oceans?

1. If you eat seafood, know what you’re eating and make choices that keep the ocean healthy. The Monterey Bay Aquarium’s Seafood Watch website is one of the best and they’ve even got an app you can consult on the go. Also, try to buy from a reliable source–studies indicate that 20% to 33% of seafood in restaurants and supermarkets is mislabeled.

2. Reduce your use of plastic, especially plastic bags and plastic straws. Single-use plastics are deadly in the ocean!

3. Remind yourself–and teach your children–about the wonders of the ocean. The cinematography in the BBC’s new series “Blue Planet II,” is both outstanding and astounding!

5. If you vacation at the beach, try to patronize eco-friendly businesses–sustainable restaurants, LEED-certified hotels, certified ecotourism companies, especially boats and snorkeling/diving companies. Want a snorkel-boat trip on Maui, for example? Consider giving your money and support to the Pacific Whale Foundation. And while you’re there (or in any part of the ocean), use reef-friendly sunscreen.

6. Remember that Utah Senators and Congresspeople vote on federal ocean and climate change legislation (including funding). Let them know that their votes on these issues matter to you.