Pakistan plays host to the most extensive irrigation canal network in the world. That vein-like system, fed by five large rivers, sprawls across the Indus Basin and is the lifeblood of the country’s agriculture industry–a sector that supports more than 40 percent of Pakistan’s workforce. 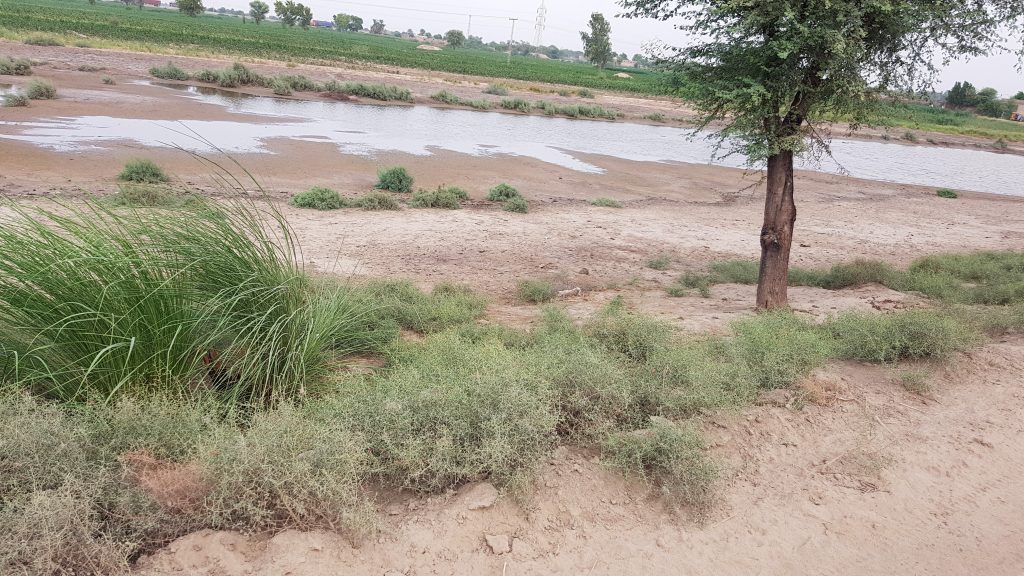 Visible seepage from the Tarah Distributary Canal in Sindh, Pakistan.

Though the country’s canal network offers a modicum of reliability for growers reliant on water delivery, farmers must also cope with unintended side effects.  As the irrigation department diverts water from the river system to farmers’ fields, large amounts of water seep from the earthen canals, causing the water table to rise. When that groundwater gets closer to the ground surface, the evaporative demand pulls increasing quantities of water skyward, creating a significant loss of water under adjacent fallow ground without any beneficial use. The groundwater evaporates but salts remain behind, salinizing the farmed fields and dropping crop yields. The result can be devastating for farmers already struggling to make a livable wage and to keep up with a booming population and climate shifts that have greatly impacted Pakistan’s two growing seasons. Seepage losses also reduce the flow rate in the canals, making it more difficult to push water to users downstream.

Dr. Munir Babar and graduate student Ahmad Rehman, researchers at Mehran University of Engineering and Technology, are investigating solutions that can alleviate the many effects of canal seepage. Working as part of the U.S.-Pakistan Center for Advanced Studies in Water, the collaboration also includes Drs. Tim Gates and Joe Scalia, both civil engineering professors at Colorado State University. The team recently completed the first phase of their project for testing the application of granular polymers to seal canal beds to reduce seepage. 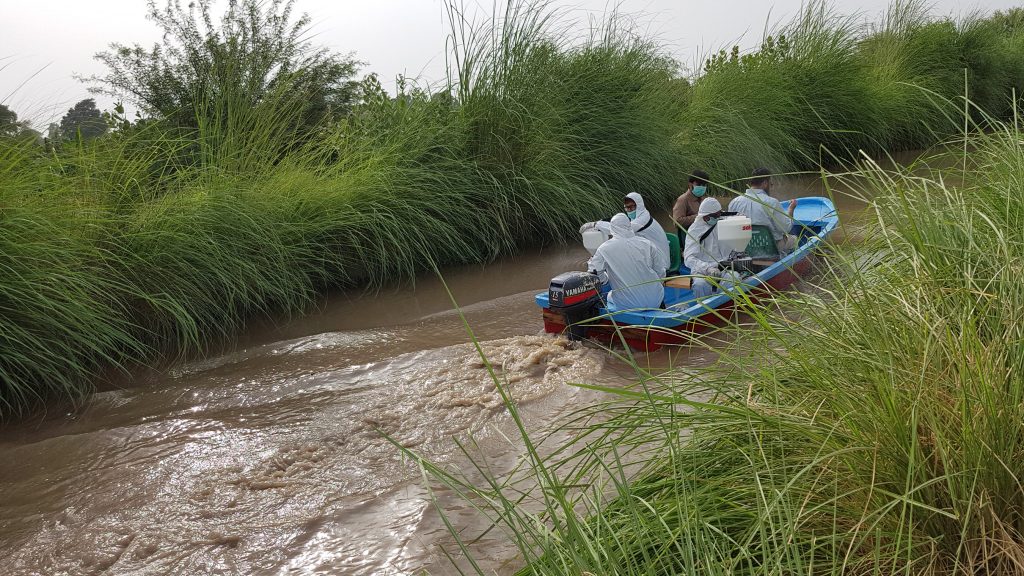 Engineers use varied methods of lining canals, including concrete and plastic sheeting, but most methods are expensive and utterly cost prohibitive for farmers in developing countries.  “If we can’t line, what do we do? Do we just have to accept the high seepage rates? Our hope is that we don’t,” said Gates.

This August, the research team shut off 19 diversions along a section of the Tarah Distributary Canal, a small branch of the canal system in rural Sindh. Riding in a small motorboat, the team seeded the sediment-laden waters with a polymer often used to flocculate and remove suspended solids in water treatment. 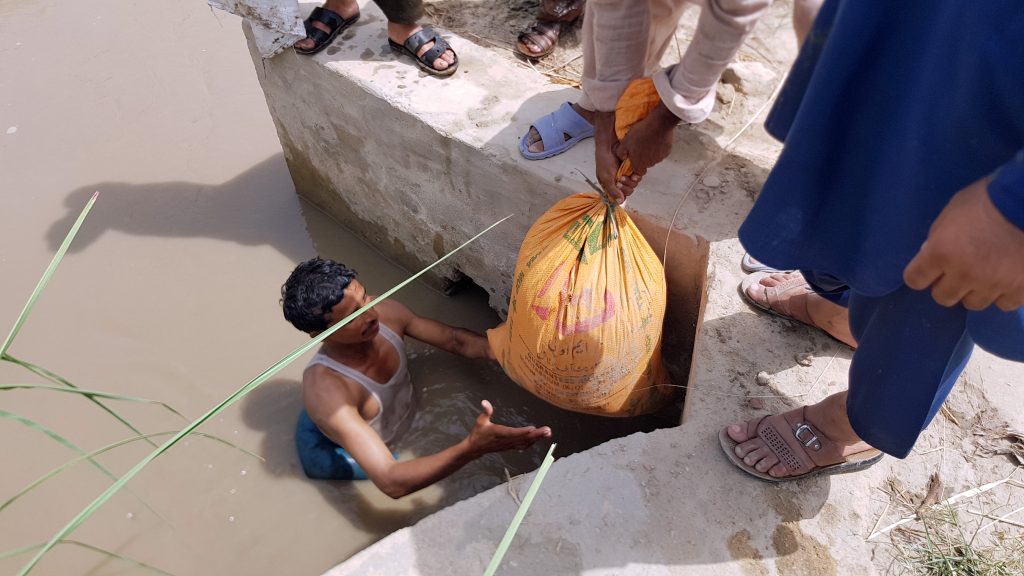 The team blocks one of 19 diversions that branch off the canal prior to seeding.

The coordination of the tests was extensive and required the collaboration of nearly 30 people, along with the assistance of farmers and the Secretary of Irrigation in Sindh, to complete.  Two representatives of the BASF Corporation–the company that partnered with the researchers to supply the polymer–drove from Karachi to observe the test.

“The polymer binds to sediment and forms what we call ‘flocs’,” said Gates. “They’re globules, like submerged dirt clods. And as they aggregate together under the water, the larger flocs start settling out to form a layer of fine sediments on the perimeter of the canal that impedes seepage.” 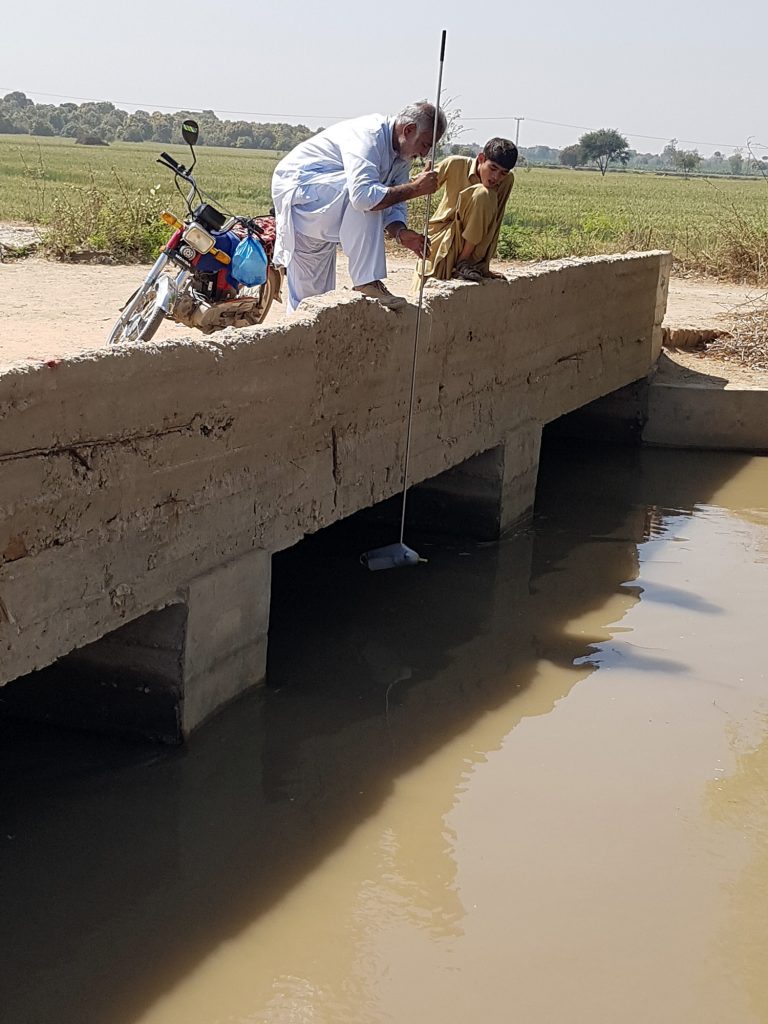 Dr. Munir Babar takes a sample from the canal.

Gates points out that the application is not a lining, but a sealant that requires repeated application, perhaps once or twice per irrigation season. He estimates the total cost, including product and labor, at three percent of what a conventional lining would cost, offering a promising alternative for farmers looking to support crop yield within limited means.

Final analysis of the impact on seepage reduction has not yet been completed, but results look encouraging. The researchers observed a 75 percent reduction of water seepage immediately after application; one month later the seepage was still reduced by 40 percent. Gates attributes the decline in effectiveness to restricted canal flows due to this year’s drought conditions.

“This is what will happen in drought conditions when canals intermittently dry up, so we have to know,” said Gates. 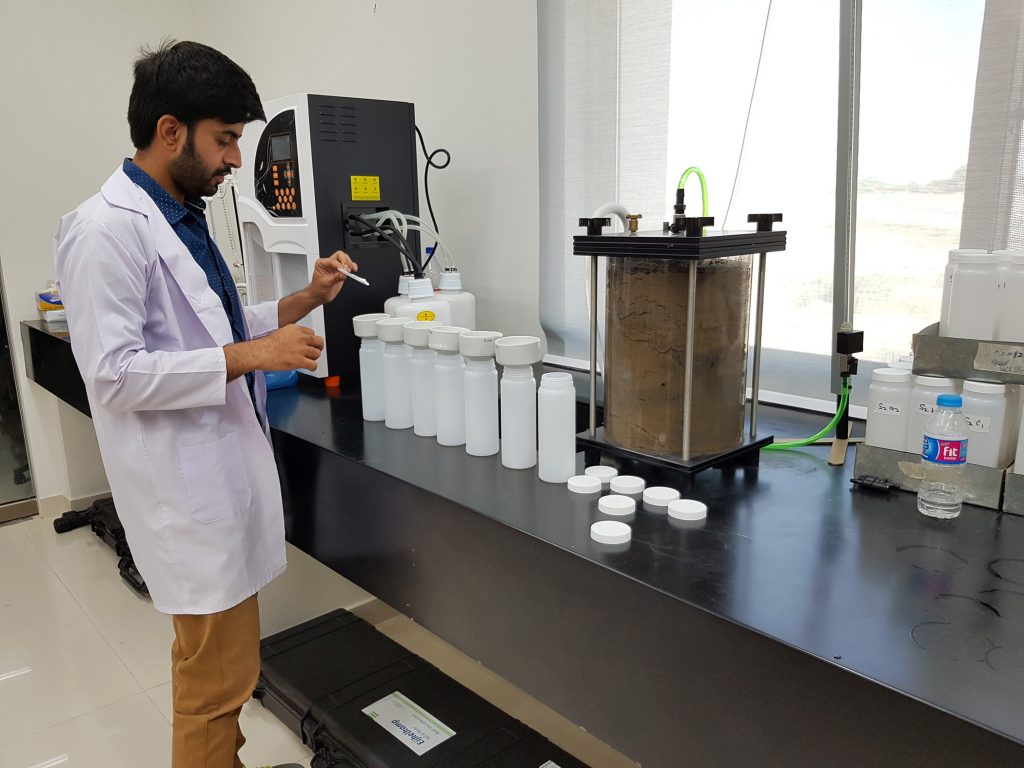 Gates has conducted similar tests in the U.S. in CSU’s work with the Desert Research Institute. In Colorado, his team has recorded results as high as 80 to 90 percent reduction in seepage sustained over two months after application.

Additional post-treatment tests are planned to track the sustainability of the effects and researchers are hoping to apply another sealant at the start of the next growing season.

“This is a field test, being conducted on actual canals. Not on models, not under controlled experimental conditions, but under real-world conditions, which I think is one of the real highlights of the effort,” noted Gates.