In October, Jewell Lund, a University of Utah Ph.D. student, and I joined researchers from Mehran University of Engineering & Technology and Karakoram International University to kickstart a collaborative research project in the Upper Indus Basin. Our aim is to differentiate between glacier melt, snow melt, precipitation and groundwater contribution to a major Indus River tributary.

The success of the year-long project is heavily reliant on regular field sampling and so we decided to focus on the Shimshal River and the Hunza River in Upper Hunza due to their relative accessibility thanks to the Karakoram Highway. The region is home to some of the most spectacular mountains and rugged landscape on the planet and finding local partners to assist with the sampling effort was critical for the success of the project. 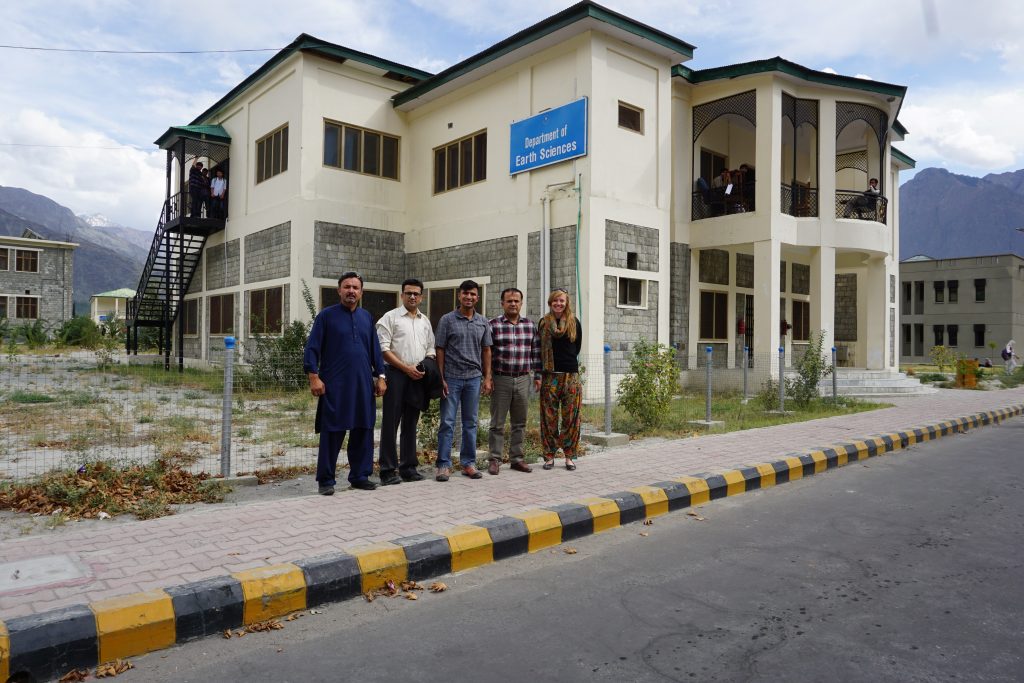 We started our field campaign at the KIU campus in Gilgit. Partners gathered and supplies collected, we began our drive to Shimshal via the spectacular Karakoram Highway. The drive offered views of beautiful apple orchards and jaw-dropping 7000+ meter peaks in the background. We got off the highway at the confluence of the Hunza and Shimshal Rivers and what ensued was a hair-raising 3-hour 4×4 drive on a narrow dirt road carved into massive mountainsides and through a number of creaky wooden bridges. The approach to Shimshal is so treacherous and the landscape so rugged that it’s hard to imagine how any civilization can exist at the end of the 3-hour drive. Surely enough though, the valley eventually widens and one is greeted by idyllic stone houses and beautiful orchards. The recent arrival of electricity and limited cell phone coverage in Shimshal has made it feel significantly more connected to the outside world compared to years gone by. 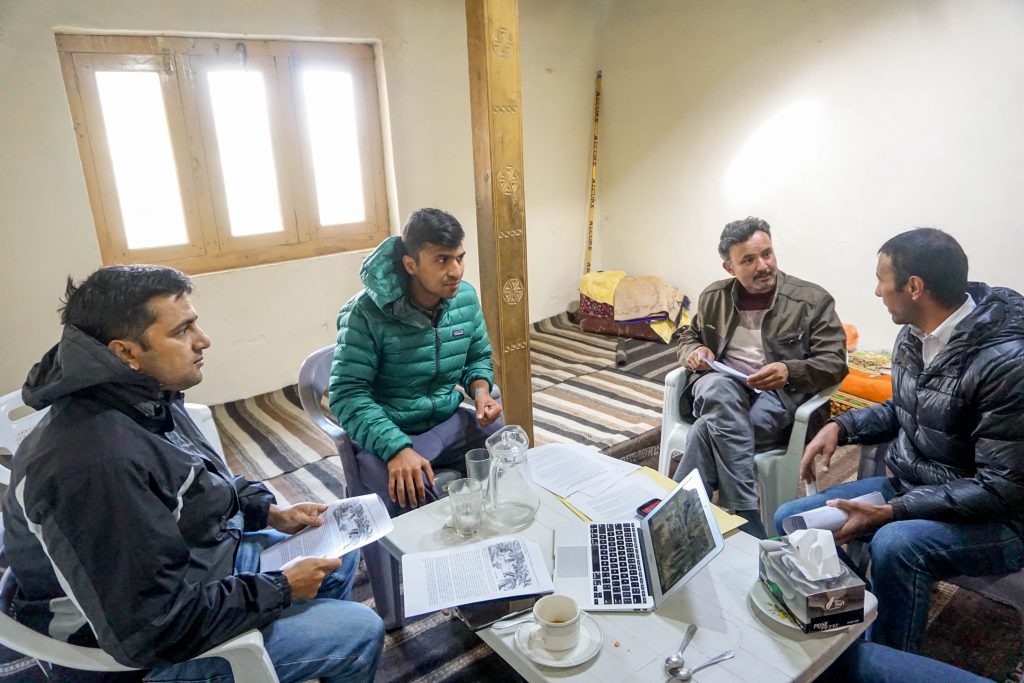 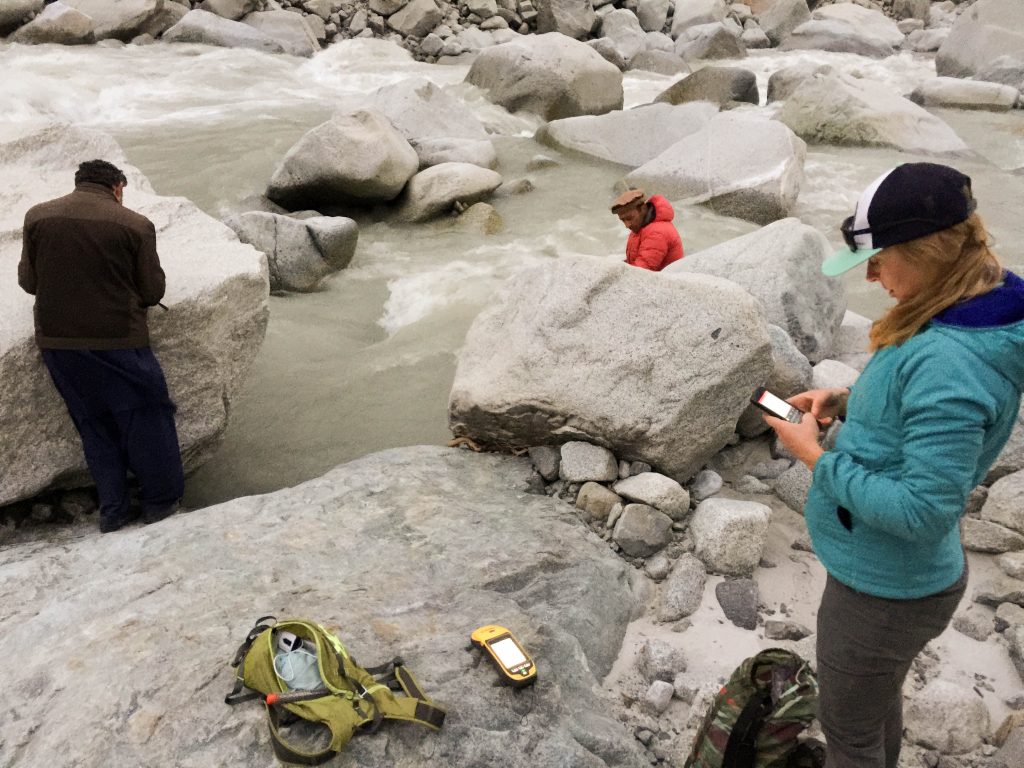 Our sampling and site selection efforts began on the Mulungutti glacier, a few miles west of Shimshal. The first thing we noticed is just how misleading satellite imagery can be at assessing the scale of this landscape. Glaciers that looked very accessible from satellite imagery turned out to be debris-covered behemoths with complex approaches. Undeterred, we spent the better part of our first full day in the valley establishing sampling sites on and around the Mulungutti glacier and its confluence with the Shimshal River. Upon our return to the village, we met representatives from the Shimshal Nature Trust, a community-based environmental stewardship organization and it was heartening to learn about their interest in and support for our research. 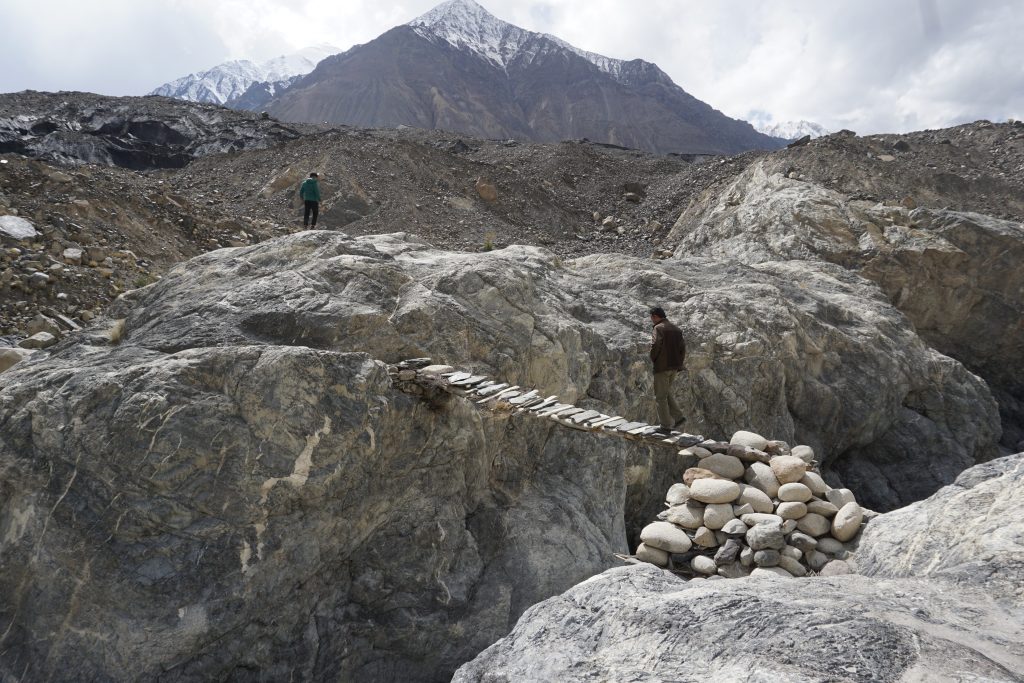 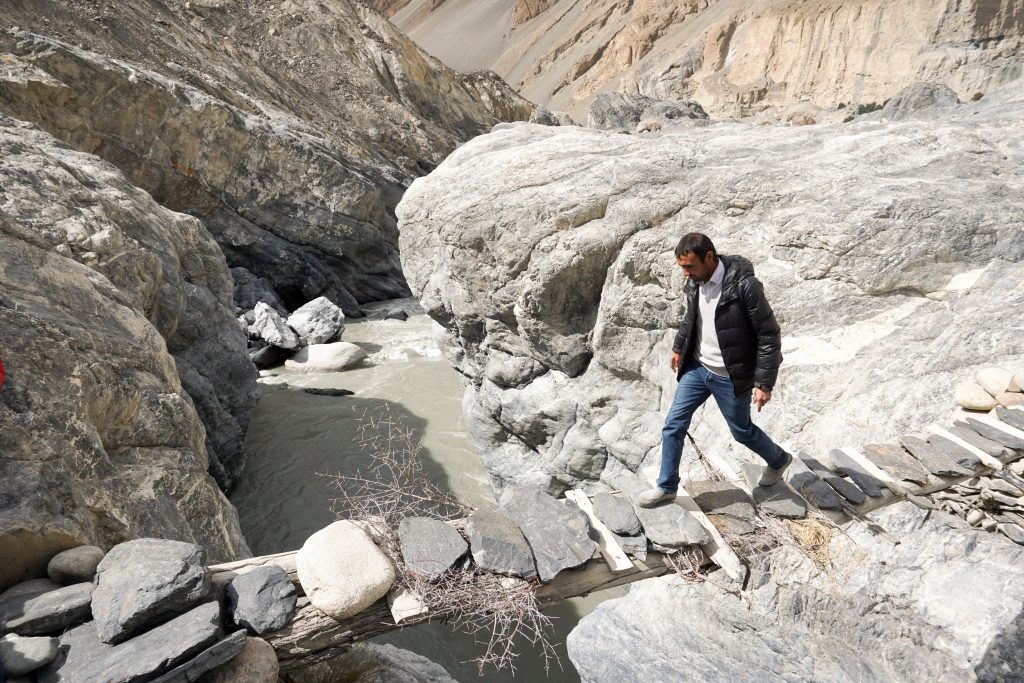 The second day in the valley involved a 6-hour roundtrip hike to the Yazhgil glacier, east of Shimshal. The village represented the easternmost limit of the 4×4 road so going on foot was our only option. The Yazghil glacier seemed even larger than the Mulungutti and had a significantly wider terminus, split into two by a large moraine. The temperature was definitely below freezing on this day and we warmed ourselves up in the afternoon with copious amounts of chai accompanied by dried fruit and traditional Shimshali bread. After finalizing sites and wrapping up sampling on and around Yazghil, we returned to our guesthouse at around dusk and thoroughly enjoyed lots of warm Pakistani food. 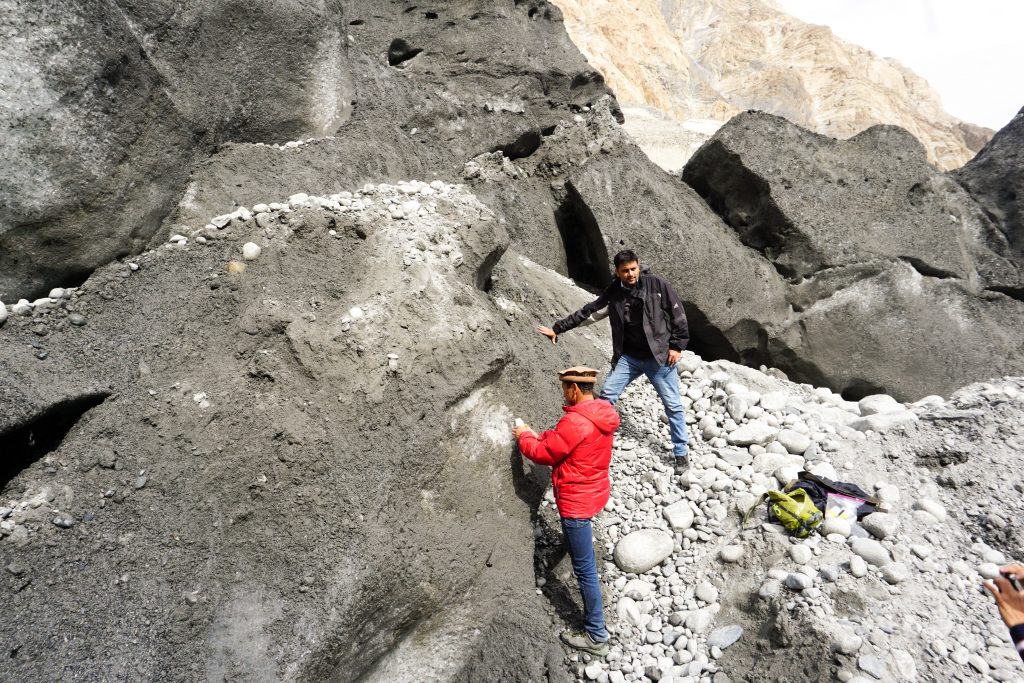 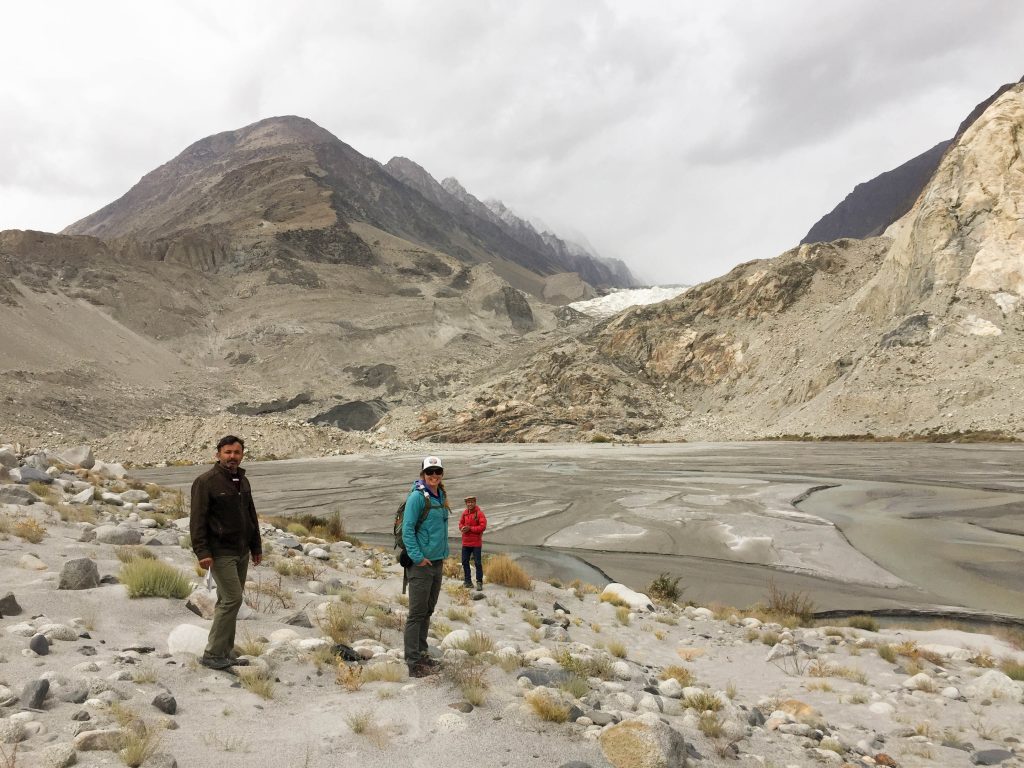 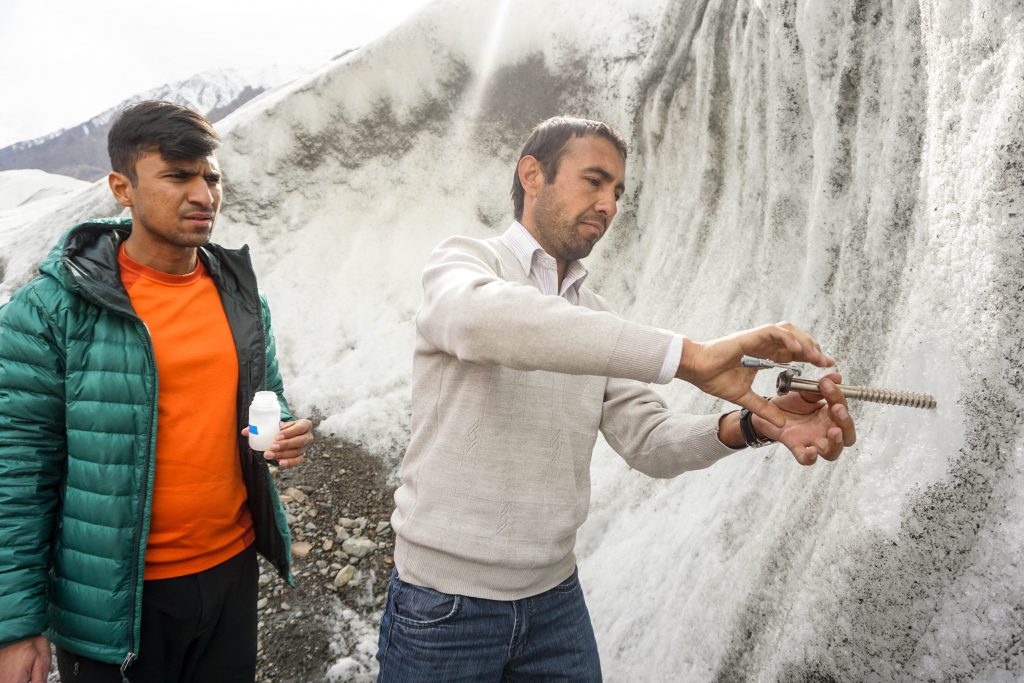 Our final day in the valley involved establishing and collecting samples at the remaining sites, including at the confluence of the Momil Glacier and the Shimshal River. This was a fast-paced day, thanks in no small part to our incredible local partners, Masood Ali and Abdul Ghafoor, who were like nimble mountain goats on treacherously steep mountain slopes. We collected our final samples from the Shimshal River before it merged into the Hunza river and then got back onto Karakoram Highway, which felt world’s apart from the precarious dirt roads of the Shimshal Valley. 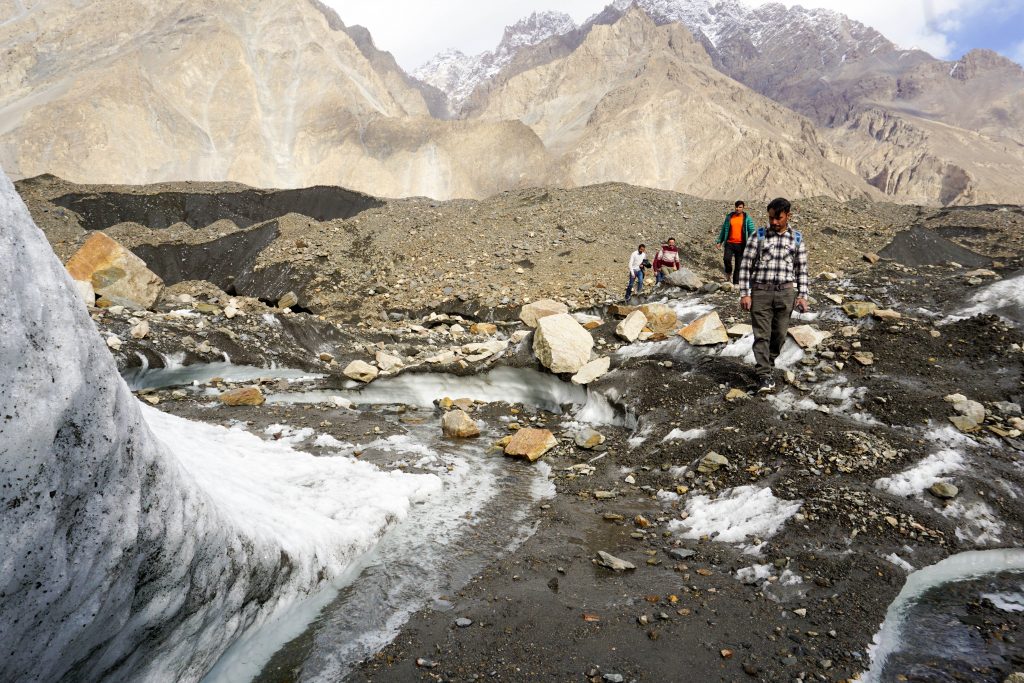 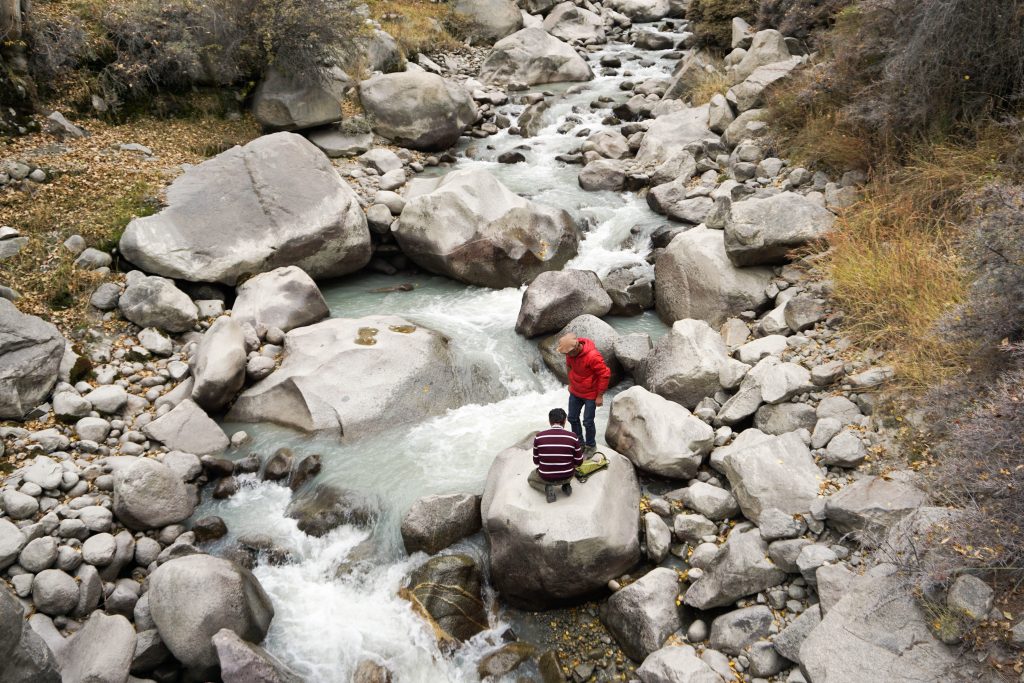 Since we had some daylight left, we decided to use the rest of the day to collect samples from the Batura glacier, one of the longest glaciers outside the polar regions. After collecting ice and meltwater samples from the tongue of the debris-covered glacier, we drove down south to Gulmit. On this day, we were lucky to see a herd of Himalayan ibex foraging on steep a steep mountainside above the Hunza River. 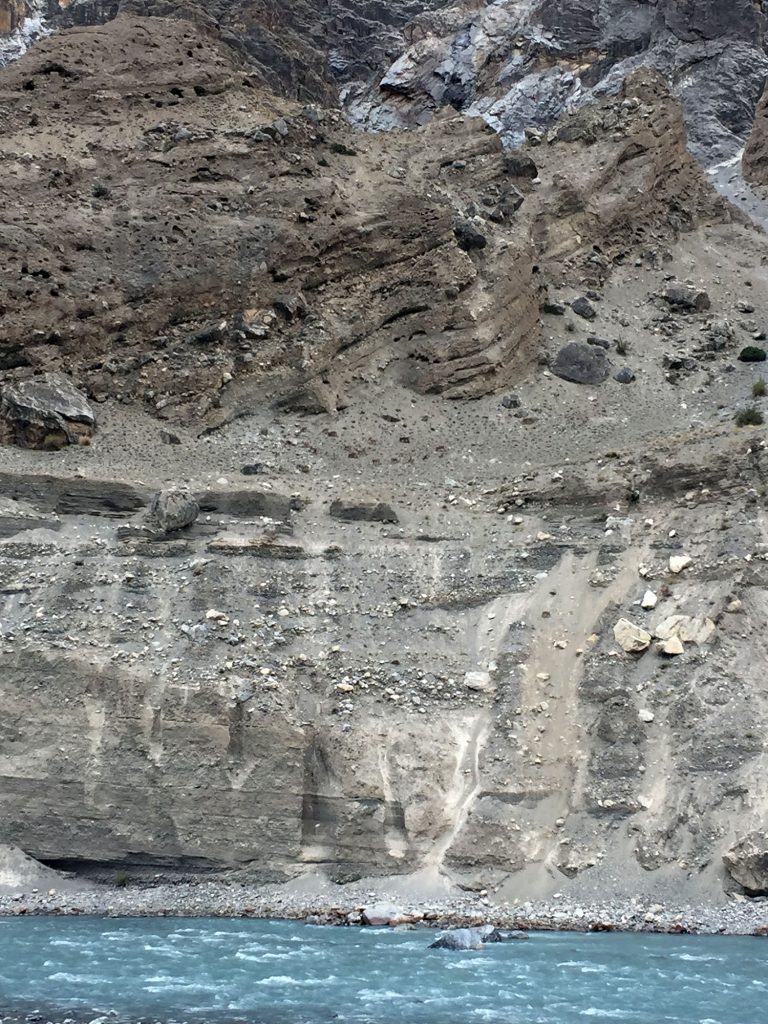 Can you spot the ibex?

Our final day in the field was a busy one since we had planned to collect samples from the Passu, Ghulkin and Gulmit glaciers but had underestimated the approach. Steep, thorny and time-consuming routes meant that we had to skip the Gulmit glacier and limit ourselves to the Passu and Ghulkin glaciers, the latter of which almost touches the Karakoram Highway. We also collected samples along the Hunza river and were awed by arguably one of the most beautiful footbridges in the world in the village of Hussaini. 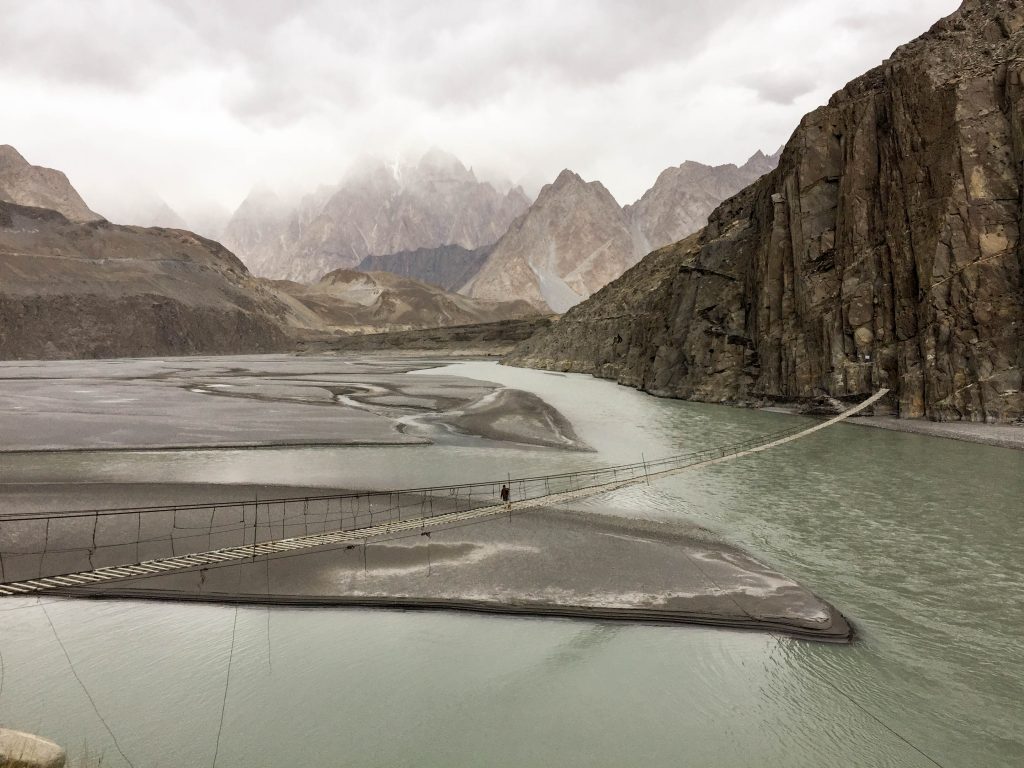 After wrapping up our sampling efforts, we enjoyed some Yak pizza in Karimabad, Hunza before driving back to Gilgit. We were amazed that the whole trip went so smoothly, especially by unpredictable Karakoram standards. Luckily, the only hiccup happened during our return to Islamabad, when there were rumors that a stowaway mouse was the cause behind our lengthy flight delay. Once we did take off, however, we were treated to perhaps the most spectacular flight on the planet with amazing views of Nanga Parbat and other Karakoram/Himalayan giants.

All in all, it was a fantastic trip, and we’re eager to see the results from our collaboration and ongoing research. 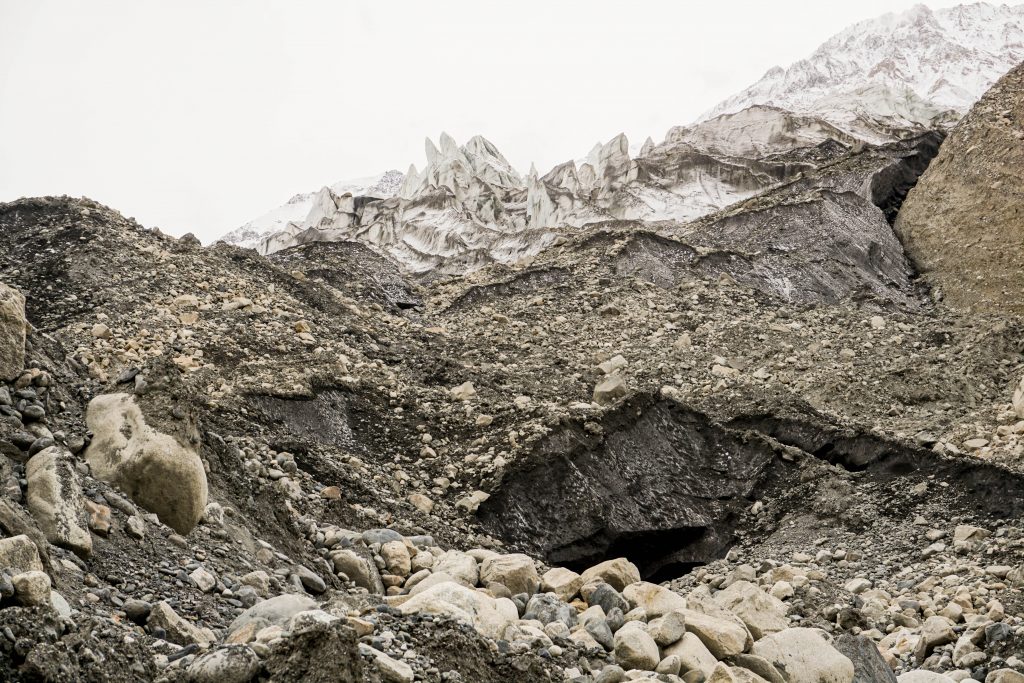 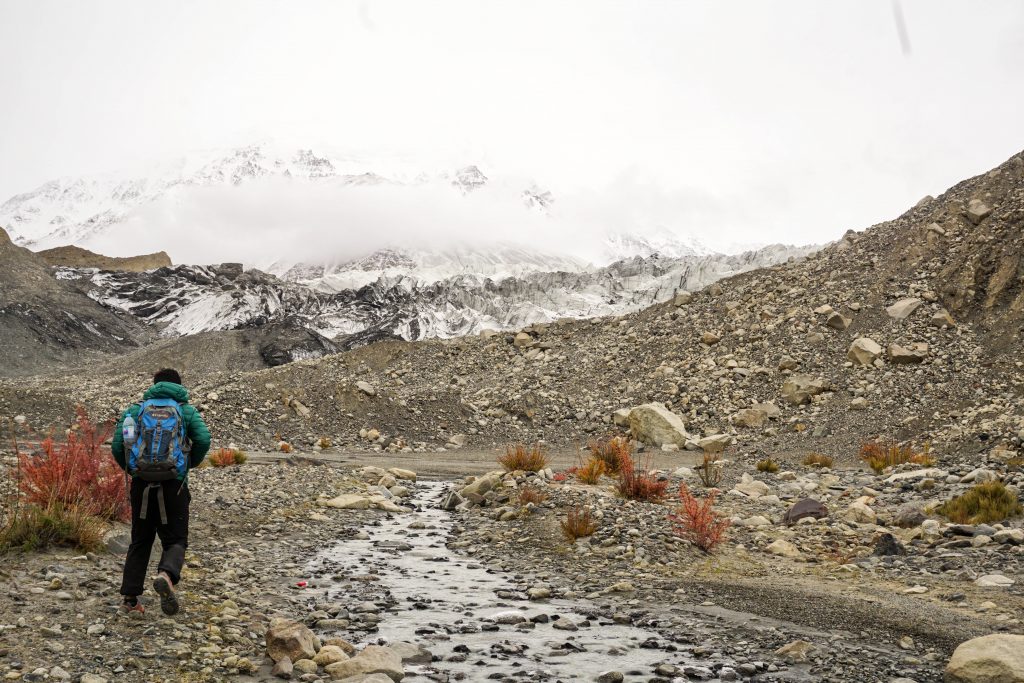 Azhar Zaheer is an Entrepreneurship Specialist with The Water Center and U.S.-Pakistan Center for Advanced Studies in Water. Hailing from Lahore, Pakistan, Zaheer holds Masters degrees from Duke University and The University of Utah. He is passionate about using business as a positive force for the community and the environment and is always on the lookout for innovative partnerships that support the Center’s global water security goals. An avid climber, hiker and cyclist, Zaheer can be found exploring unclimbed routes in the Karakoram or introducing newcomers to climbing in his free time.